Insects in the Garden 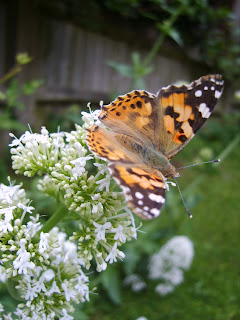 This is National Insect Week and so I thought I'd note a few things down about some of the fantastic insects that visit the garden. But first of all I'll start off with a very brief explanation of what insects are.
As a gardener it is easy to fall prey to the idea that insects are pests. From sap-sucking greenfly to tree-munching beetles all those voracious garden mini-beasts can ravage your prize veggies and gorgeous blooms quicker than you can say 'where's my spray gun!'. But, if you can hold off with the pest control and use it only as a last resort, then your garden will be richly rewarded not only with the occasional munched leaf but also with visits from those creatures we don't call pests like birds, bats, frogs and hedgehogs. Because insects are pretty much the first rung up on the food-chain ladder after salads and, to a lot of creatures they are not pests at all, they are lunch.
Generally an insect has six legs, three body parts, antennae and often in adulthood has wings. This means that spiders, woodlice, slugs, snails and worms are not insects. Insects often have complex life-cycles of their own, think of the metamorphosis of butterflies and dragonflies. They can live in highly ordered and complex societies like bees and ants and there are lots of different orders and sub-orders of insects, from beetles and bugs to moths and flies.
But best of all, insects can be beautiful and weird all rolled into one. Like this little lady who has taken up residence on our patio during these past few warm summer nights. 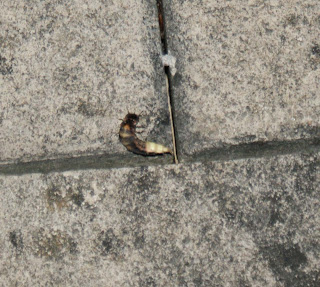 She looks like a cross between a woodlouse and a caterpillar and is called a Glow-Worm but is actually a beetle (Lampyris noctiluca). She's attracting a male by lighting up her abdomen with her strange greenish glow. The male beetles have wings and so just have to look out for her glowing bio-luminescence in the garden as they fly over. 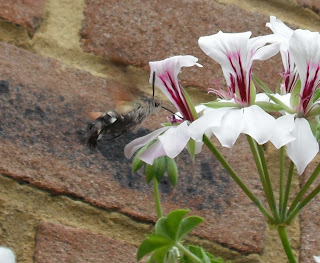 Another strange insect is this creature. It flies like a humming-bird and looks like a big woolly butterfly but is a day-flying moth called the Hummingbird Hawkmoth (Macroglossum stellatarum). It is quite happy humming around the summer garden sucking nectar from the hanging basket flowers and not at all like those strange, powdery, light-flittering night moths that people dislike so much. 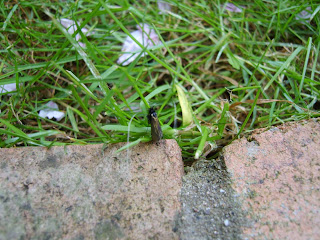 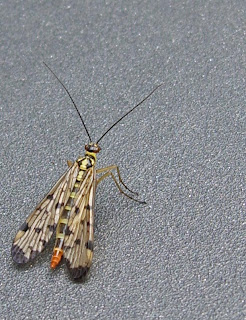 Or how about the Scorpion Fly (Panorpa germanica) which is, unlike its namesake, completely harmless and the Bee-fly (Bombylius minor) which also has no sting, isn't a bee but, as a larvae, lives in the nests of mining bees. 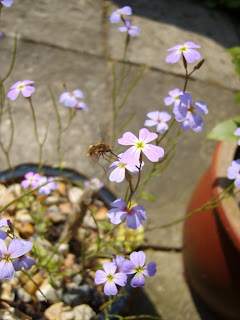 But if those insects are all a little too weird to be beautiful then feast your eyes on the butterflies (Lepidoptera), from Common Blues to Peacocks, these gorgeous jewel-winged beasts are always a delight to spot among nectar-rich flowers. 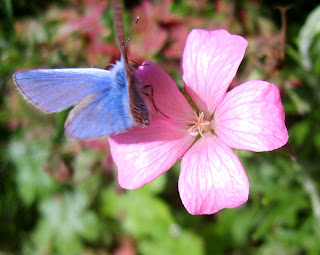 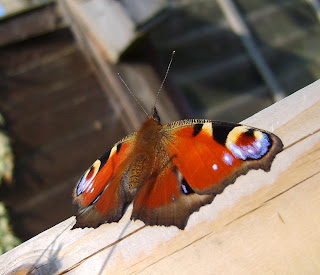 Or, if you like your insects a little shinier, faster and more streetwise how about the dragonflies (Odonata). Zooming in low over the garden, hunting smaller insects on a hot summer's evening these surely are the hot-rods of the insect world? 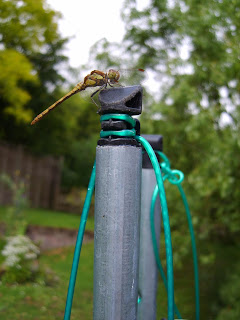 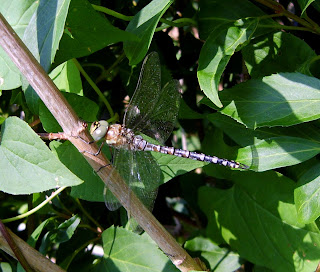 Fascinating and fantastic, insects are also valuable in the garden. They pollinate flowers, clear up dead animals and rotting vegetation, prey on slugs and snails and provide food for mammals and amphibians. Weird and wonderful, and best of all, we can find these creatures by just stepping out into the garden.

Photos from Ripplestone Garden
More about the 2010 International Year of Biodiversity.
Posted by Trisha xx at 10:53