The Ballad of Blue Bell Hill 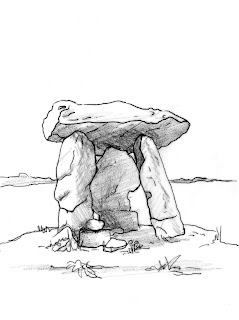 (A rhyming account of its long history & folklore with accompanying annotation)

Together, as brothers stand, whether Man of Kent or Kentish Man.

Sit with me, here on this hill
And hear the echoes if you will
Of ghosts and battles long since lost
And how too many paths have crossed

Pre-history on the Hill

The Pilgrims Way - from the Middle Ages on

Through the Hill to the Future


Pre-History on the Hill

The arrow sears the bended bow
And seeks its quarry far below
The chalk ridge where the hunter spies
A hart, unsaved as flint-tipped arrow flies

Bow to the moon(2) and dance and sing
For the bounty nature brings
A full belly and the warmth of mead
&, as the hunter tells his heroic deed
The firelight flickers on the faces still
Enrapt by his chase up on the hill

Flints and potshards point to
A passage overland(3) and through
This corner of the ancient land
Where the first Briton did stand
And look to the river and beyond
Westward, Wales and Scotland on
And made a home here on the downs
Neolithic hunting grounds

Up to the hill, across the downs
From east to west and northward bound
We’ll walk the footsteps gone before
Of ancient deeds and long lost lore

Kit’s Coty, long since worn away
And Little Kit’s(4) in disarray
A pile of sarsens on the ground
Where once stood a burial mound
Higher still on the North Downs Way
Are where the White Horse stones(5) still lay
~

Who decide to invade these shores
And embark on bloody occupation wars
Caesar and 10,000 men
Soon undone by the Belgae when

The roman ships caught by storms
Dragged up on Deal’s beaches form
An easy target and Caesar, twice repelled
Withdraws, a Gaulish uprising to quell

An army 40,000 strong
Sees Aulus Plautius marching on
Durobrivae(6), where the river’s violent breach
In two days, puts Britain in the reach
Of Roman occupation and domain
And has Caractacus(7) in chains

Four hundred years of Roman Kent
And, for Blue Bell Hill, this meant
A road from Rochester, Maidstone and through
The weald for the iron-ore and timber fuel
Past battlefields and White Horse Stones
Roman legions marching home
Over cambered slab, flint and gravel
Constantine’s(8) chariot travels

But the battle at Aylesford ends
In no victory when
Catigern, Vortigern’s second son
Is slain by Horsa, whereupon
Horsa dies on the battlefield
Leaving his brother, Hengist’s, fate sealed
To claim the county for Saxon intent
And start the lineage, the Kings of Kent

At Kits Coty, pagan- blessed
Catigern’s body is laid to rest
To the megalith when Horsa’s slain
Under the White Horse Stone he’s lain


The Pilgrims Way - from the Middle Ages on

St.Thomas Beckett(9), a martyr made
And in Canterbury Cathedral laid
So pilgrims walked down Watling Street(10)
To heal their poor and blistered feet
But scorned the trade route up the hill
Chaucer’s words to keep them to their will

Centuries pass on the wooded lee
En route from Winchester to Canterbury(11)
Crossed by holloways(12) and sunken roads -
Where the swineherds and carters drove
Oxen, sheep and market pigs down to the Weald
From winter heights to summer fields -
Ringing with the bell teams(13) whose names
Still grace the taverns(14) along those lanes

And so those quiet ways came to be
A place rife for skulduggery
Ufflers(15), owlers, ghosts galore
Highwaymen and wild folklore

Three pound duty(16) for wool export
Then smuggle it out and in retort
Brandy, lace and a cup of tea
For all of London’s fine ladies

Even Kit’s Coty was a smugglers trove
And so the legend of the black beast grows
No spectral hound or wish-dog lair
Just a place to stash misbegotten fayre
Unless, like Charles Igglesden(18), you did hear
Of the poor peddlers’ mortal fear
The Devil’s abroad they’ll whisper late
And here’s the story of their fate

In 1745, two peddlers on their way
From Trottiscliffe into Medway
Spy ‘a great lean hound with prick’t ears’(19)
That, on the path in front, appears

Too late to cry out, it leaps in one bound
And savages a peddler to the ground
There he was buried where he fell
Killed by the grey hound of Hell


Through the Hill to the Future

Until a Victorian Reverend was walking home
From Boxley Church when, near the Druid(22) Stone
His way is blocked by a great grey dog
As large as a calf and fierce as Beowulf
It gives chase to the vicar till at last
It disappears just as fast
This hell hound haunts Frith Wood still
The notorious Beast of Blue Bell Hill

Now the hill is cut with newer roads
And in 1823 one of the White Horse stones
Is smashed up and laid underneath
The Chatham Road, out of the historians’ reach

But on the chalk hill’s shoulder lays a sad weight
An Air Ambulance crew lost in ‘98 (25)
There’s a memorial to them at the picnic site
And, from that vantage point, you just might
See a pattern emerging in the fields
A circle26 of interlocking shapes and wheels
How it got there remains a mystery
Strange hieroglyph for all to see

Then, on May Day near sunrise
If you get to the green for five
You’ll see the sweeps wake Jack-In-The-Green(27)
All dressed in his basket of evergreen

And invite him to join them
And the merry sets of Morris Men
Who fill Rochester’s High Street
With the sound of stick, drum and dancing feet

It’s true, from ancient flint to modern drill
We’ve taken to and from this hill
Where future paths will follow, no one knows
But our history was written on these roads
Up on the hill the view is revealed
Across the Medway and on to the Weald
Sings the wind and, listen, if you will
You’ll hear the Ballad of Blue Bell Hill

1 The Upper and Lower Bell public houses rang bells to allow safe passage on narrow carriage way between top and bottom of hill for horse-drawn vehicles.

2 Evidence from Stonehenge and Ireland suggests the moon was equally as important as the sun in Neolithic calendars.

3 The land bridge between England and France existed up until about 5000BC. Running across this land bridge was the Harrow Way a prehistoric trackway that now encompases The Hog’s Back, and The North Downs Way.

4 Kits Coty and Little Kit’s Coty are the remains of Neolithic long barrows.

5 Megalithic stones. Only the Upper stone now remains, the Lower stone was broken up in situ when the A2249 was built.

7 Caractacus was eventually handed over to the Romans in chains by Cartimandua, queen of the Brigantes.

9 In 1160 AD, St Thomas Beckett, the Archbishop of Canterbury was murdered in his own cathedral. His shrine at Canterbury became the focus of pilgrimage in the following centuries.

10 Watling Street was the route used By Chaucer’s pilgrims in The Canterbury Tales, following the old Roman Road from St Albans to Canterbury. By the 1600’s the pilgrimages had almost stopped.
11 The North Downs Way trading route was 120 miles long.

12 Holloways or droveways were routes used by farmers to take their livestock from the top of the Downs down to the summer grazing found on the Weald. Over the centuries these became worn down into sunken lanes.

13 Due to the narrow and steep roads it was hard for two carts to pass by and so bell teams were used to warn oncoming traffic of the cart’s approach.

14 The Upper and Lower Bell inns, on the old Maidstone to Chatham road used this tradition of ringing a bell every time a vehicle went up or down the steep narrow track between them until the road was improved.

15 Ufflers worked as casual labour for the barges along the Medway River and Owlers smuggled wool.

16 The levy of duty on wool and gold exports, started in the 13th century, gave rise to smuggling.

17 Tobacco, lace and silk were smuggled in from the French coast wrapped in oilskins. The goods were normally purchased in France but then smuggled over to avoid the heavy import duties.

18 , 19 In his ‘Saunters In Kent’ Charles Igglesden mentions twice the appearance of a ‘Great Dogg’ near Maidstone. Modern sightings being investigated as wild cats such as the black leopard.

20 At the end of the 17th century, by act of parliament, the Turnpike Trusts were set up to build and maintain new roads. A toll would be charged for use of these roads and was collected at toll gates and houses.

21 There are still many modern sightings by motorists on roads near Blue Bell hill, often of phantom hitch-hikers.

22 The Druid Stone is an alternate name for the remaining White Horse stone.

23 The Highways Boards were public authorities set up in the 19th century to replace the Turnpike Trusts as these were often badly run, in debt and unable to maintain the roads.

25 The Kent Air Ambulance crashed in fields near Burham while returning to it’s base at Rochester on Sunday 26th July 1998, three crew members were killed in the accident.

26 Crop circle formations have appeared all over the UK and, at one time, believed to have been the work of extra-terrestrials.

27 Jack-In-The-Greens are sometimes known as chimney-sweepers garlands and have long been associated with the trade. They are men dressed in a basket-work or wicker frame covered in garlands of evergreens such as ivy and participate in May Day celebrations, the traditional holiday for chimney sweeps. The Climbing Boys’ Act 1868 made it illegal to employ young boys to sweep chimneys and the May Day processions slowly fell out of favour. The final May celebration in Rochester was held in the early 1900s. This traditional festival was revived in 1981 as The Sweeps Festival, which begins with the waking of a seven foot Jack-In –The-Green on top of Bluebell Hill.
Posted by Trisha xx at 07:03 1 comment: