Well finally it is looking as though Spring temperatures might arrive this week, so until I can get out and get on with some gardening, here's some birds who have been visiting the garden this winter ~ 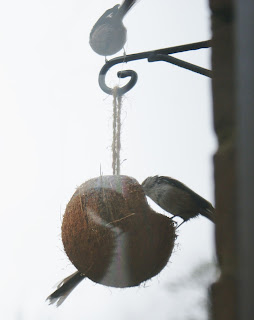 Long-tailed Tits ( Aegithalos caudatus)
To encourage long-tailed tits try planting for an insect and butterfly/moth rich habitat. Plenty of roses, honeysuckle, willow and herbs. They like high food sources and so plenty of good scrubby cover and trees. 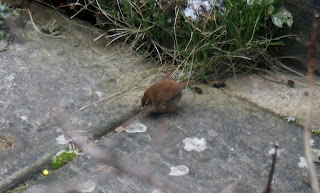 Wren (Troglodytes troglodytes)
Love the Latin name of this little bird, which means a reclusive, cave dweller. They are insect and spider eaters so low ground cover perennials to establish a good hiding and foraging habitat and nesting boxes/old teapots hidden in ivy clad walls are an incentive to stay in the garden. 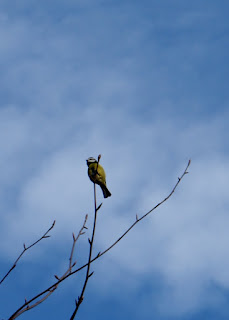 Blue Tit (Parus caeruleus)
To encourage blue tits try shrubs and trees for berries, insects and spiders like ivy and buddleja. They love high energy bird food but, like the long-tailed tits, it needs to be high and out of the way of predators. 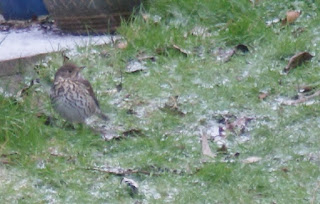 Thrush (Turdus philomelos)
These shy birds love snails. Slugs and snails and insects. And berries. But mainly snails, which is probably not what any gardener wants to hear. You don't need to encourage slugs and snails but just stop killing them.  As organic pest controls go, thrushes and blackbirds have the added benefit of a beautiful song. 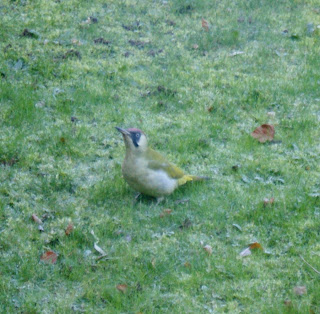 Green Woodpecker (Picus viridus)
This is a real specialist feeder. They love ground feeding on ants and prefer woodland or forest nearby to your garden and grassy spaces with established ant colonies to dig into. My tip to keep ants out of the house and in the garden for the woodpeckers is to place a small container (I use an old jam jar) with some jam in it near the path they use to get into the house once they have woken up in Spring . Make sure it is secured and not a danger to you or your pets/children/wildlife. The ants will prefer it to the long trek into the house and just keep it topped up every now and then with a bit of jam.

Organic gardening, less tidy gardening, more tolerance of weeds and seedheads and ground cover plants as well as mulches. Longer lawns, extended flowering season from annuals and herbs, single flowering plants as well more exotic double blooms, berries and native tree species.  All these things help to make a rich habitat for birds and make overwintering in our garden easier for them.

For information on your garden birds try ~

Rain lashes the glass in wind driven waves as Sam nurses a mug of hot, sweet tea to his chest. Lyme Bay stretches out before him, a wild and seething cauldron as the storm races in, clouds piling up over the slumped cliffs to batter the conservatory of his bungalow with an onslaught of hail. As the night falls Sam can see several dark hulks moving closer into the bay, ships looking for shelter from the storm, their thin lights stuttering through the spray. He sips his tea and wonders what to do, until the storm dies down there is little chance of sleep. The large chalkboard behind him is wiped clean, no ongoing cases at the moment but the usual stack of files on the wicker armchair is weighted down with a worn ammonite. Sam reaches down and runs a finger over the ridges of the fossil. But work didn't appeal tonight. It was a night for watching the sea. Spring storms were always the best and, as a long blade of lightning slices the sky open, Sam settles into a nearby armchair and watches the show unfold across the bay.

On the journey back to the FSS Sam and Anne lapse into a silence, eventually broken by Anne.
'Look, I'm sorry about being so bad-tempered this morning...'
Sam waits to hear the end of the sentence sensing there is more to follow.
'It's just... well. We've had a lot of bodies that are already dead and buried recently and I'd quite like it if we had a fighting chance of finding someone alive. You know what I mean?' Sam nods, knowing exactly the feeling of frustration and disappointment accompanying each new body. 'No hope of a happy ending for them.'
'Maybe not a happy ending but how about a bit of justice and a decent burial?' Sam asks, searching for a reason to give her. Anne sighs, 'That'll have to do I guess.'